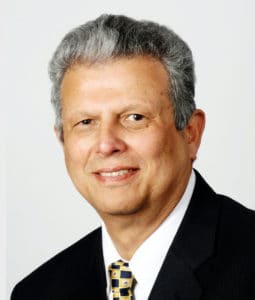 The board of directors of EGS Energy Limited are proud to announce that their colleague Roy Baria has been awarded the Patricius Medal for 2022 by the German Geothermal Energy Association at a ceremony today during the European Geothermal Congress in Berlin, Germany.

The award of the Patricius Medal recognises Roy for his 40 years of outstanding contribution to deep geothermal cause worldwide.  Roy is a geophysicist by profession, with mechanical and electrical engineering qualifications.  Roy’s experience include the managing, planning and development of Engineered Geothermal Systems (EGS) specialising in micro-seismic monitoring of EGS reservoirs, active seismic, development and characterisation of EGS reservoirs.

During his career in the British Geological Survey, Roy was seconded as a manager to the Camborne School of Mine’s Hot Dry Rock Programme at Rosemanowes in Cornwall, ending up as Deputy Director there, and then to the European EGS project in Soultz, France, as the Scientist in Charge and one of the three coordinators of the European Union (‘EU’) EGS project. Over 15 years, Roy was responsible for planning and implementing the EGS programme, co-ordinating scientists from various nations, preparing annual reports for the EU and developing diagnostic methods to evaluate EGS reservoirs.

A consultant now on EGS and associated technologies to various organisations in Europe, the United States and Australia, he is the Technical Director and a founder shareholder of EGS Energy.

The patricians (from Latin: patricius, Greek: πατρίκιος) were originally a group of ruling class families in ancient Rome. The distinction was highly significant in the Roman Kingdom, and the early Republic, but its relevance waned after the Conflict of the Orders (494 BC to 287 BC).

With the Patricius medal, since 1994 the Federal Association Geothermie has honoured those who have earned around the respect of the industry through their development of terrestrial heat use in an outstanding way.

Every year the German Geothermal Energy Association awards the Patricius Medal at the Geothermal Congress.  It is awarded to personalities who have dedicated their life's work to the development of geothermal energy.  The medal is named after the holy martyr Patricius of Bursa, who described geothermal energy as the origin of hot springs as early as 360AD.  He was executed by the Roman Proconsul Julius for insisting on this scientifically and historically remarkable declaration and was later canonized.

The Company through its subsidiary Eden Geothermal Limited plans to establish its first 4MWe plant in Cornwall using an engineered geothermal system.  The development is under way and further information can be found at: www.edengeothermal.com.

There are a number of areas on the Cornish granite that the Company has identified as optimal for the development of EGS, for the first power plant and further EGS power plants.

The electricity and heat produced by EGS Energy will be:

•          small in terms of its physical and environmental footprint.

The team has amassed over 90 years’ experience analysing, designing and operating reservoirs and has now launched this commercial enterprise, initially in the UK but then throughout Europe.